Announcement of the Name Change of Organization

With pleasure, we would like to inform to the public and all those who are associated with our organization “Burmese Rohingya American Friendship Association (BRAFA)” as well as the supporters and well-wishers of this organization that we have changed the name of the BRAFA as “Rohingya American Society (RAS)” effective from the date of April 27, 2014 through mutual and open discussion of the BRAFA Executive Committee members in a meeting held on April 19, 2014.

The factual reason and basis of the name change was because we have observed the strong bond of friendship and diplomatic relation has been developed between the Government of America and the Republic of the Union of Myanmar (Burma) recently. So, the Executive Committee and members of the organization realized the necessity of the name change of BRAFA into a more realistic and objective name such as “Rohingya American Society” with some changes of aim and objectives by law in the general meeting to continue carry on future activities of the organization.

We look forward to work with all organizations and activists in the future in team spirit.

With our thanks in advance,

With pleasure, we, the members of Burmese Rohingya American Friendship Association (BRAFA) are very pleased to announce the formation of BRAFA formed on the date of September 01, 2012 by the Rohingya American and residents in Milwaukee, Wisconsin State after extensive consultation and discussion among the Rohingya members to advocate the cause of UN documented the most persecuted ethnic Rohingya minority people of the world as well as to draw world-public opinion in favor of the Rohingyas’ rights to survive as equal Burmese citizens with dignity and honor in their homeland of Arakan-Burma.
On the basis of new development, the United States of America is now engaged to establishing a strong relationship with Burma after easing all sanctions from Burma which is also known as Myanmar. The American government has already established full diplomatic relation with Burma too. So, American people should know about Burma, its people and current situation.
In Burma there seem amazing changes and it is opening to the world after many years of isolation but in a remote corner of Burma, in the North-western region known as Arakan for centuries which name was changed to Rakhine State in 1974 by the previous Burmese military government, there lives a people known as Rohingya, an indigenous and native people of old Arakan Kingdom. They are being identified as Burmese Rohingya as now Arakan is a part of Burma.
The people of America and Burma know very little about the Rohingya people. Interaction between the two countries has not been at the people’s level, but it has been very largely limited to each other’s government. The need to open a channel for people to people interaction between the people of USA and Rohingya people of Burma gave birth to the “Burmese Rohingya American Friendship Association (BRAFA)” in a general meeting held on the date of September 01, 2012 in Milwaukee, Wisconsin State with the initiative and active participation of Burma and Rohingya origin US citizens and residence.
Mission Statement
The mission of the BRAFA is to work with the United States Government, particularly with the United States Senate, House of Representatives, and the States Department to facilitate the legislative and the Burmese Rohingyas’ policy-issues.
The BRAFA shall implement projects for Rohingya refugees, immigrants, and residents in the United States in the field of education, professional development sectors, social welfare, cultural and community development so as to promote the friendship and harmony between the people of USA and entire ethnic Burmese nationalities in particular, the Burmese Rohingya people of Arakan State who are the victims of controlled genocide and inhuman atrocities.
Aims and Objectives of BRAFA
1-To promote values of democracy, human rights, equality, justice and freedom, and strive for peace in Arakan-Burma and the world,
2-To create awareness in both countries (USA and Burma) about common issues, building mutual trust and common opinion on the rights of self-determination in order to strengthen friendship towards strong solidarity in stopping human rights abuses, inhuman atrocities, racial discrimination, genocide and ethnic cleansing against the Rohingyas in Burma,
3-To work together with all concerned quarters for the restoration of Rohingyas fundamental human rights in Arakan-Burma through democratic and peaceful means by organizing needful programs and events to create awareness on the suffering of Rohingya people and finding a durable political and humanitarian solution for them,
4-To cooperate with all concerned quarters especially, the Burmese Rohingya institutions working for the same aims and objectives of BRAFA with respect and honor,
5-To advocate the cause of world most persecuted Rohingya minority people and draw world-public opinion in favor of the Rohingyas’ rights to survive as equal Burmese citizens with dignity and respect in their homeland of Arakan-Burma,
6-To enhance particularly, strategic planning and policy in spirits of peace and stability throughout circumstantial initiatives,
7- Maintain communications with US government, local and international NGOs, civil societies and communities, human rights organizations world-wide including the United Nations regarding the plights of Rohingya people,
The Burmese Rohingya American Friendship Association (BRAFA) has been functioning since the date of formation with the elected office bearers and members of the following Executive Committee. The Executive Committee members are elected for a term of 4-year period. 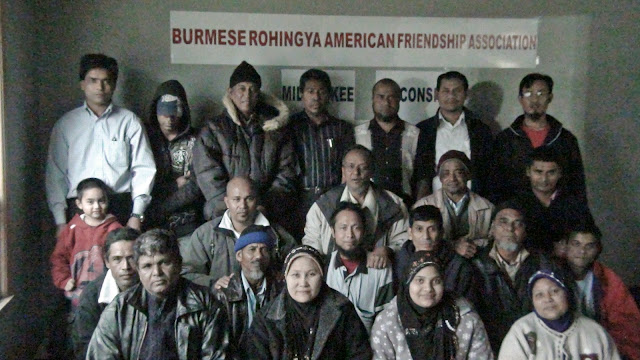 How Rakhines plus police Attack 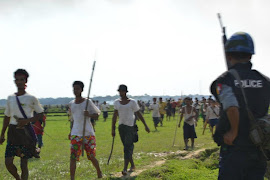 Pl, see more pictures by clicking on the photo

The genocidal attacks against unarmed defenseless Rohingya civilians have been resumed in Arakan from 8 June 2012. The military government that has quietened the 60 millions population for five decades, wisely pretends to be uncontrollable the situation while local media are still trying to neglect the ongoing violences by repeating a fabricated murder case of individual.

Despite the quasi-civilian government lessly described to fancily balanced up the death toll and destruction numbers,

in reality the death toll is more than (10,000) people, burned and destructed about (22,000) houses plus (92) mosques from hundred muslim villages across (9) different towns of Arakan state. While the number of injuries, rapes, looting, arbitrary abuses is uncountable. About 150,000 homeless Rohingyas in Sittwe/Akyab alone but less than half of them have been listed in five refugee camps and receiving very poor assistance.

The rest about 50,000 shelter-less mulsim victims comprising Rohingyas, Kaman and Rakhine muslims in 7 other towns- Maundaw, Rathedaung, Kyauktaw, Pauktaw, Rambre, Myebon and Ponnagyuan towns are still compelled to die with starvation. The rest of the Arakanese muslims in all over Arakan state are also facing critical food shortage from the beginning as a result of the government still impose confinement on them and Rakhine people are still allowed to carry vigillant attacks...